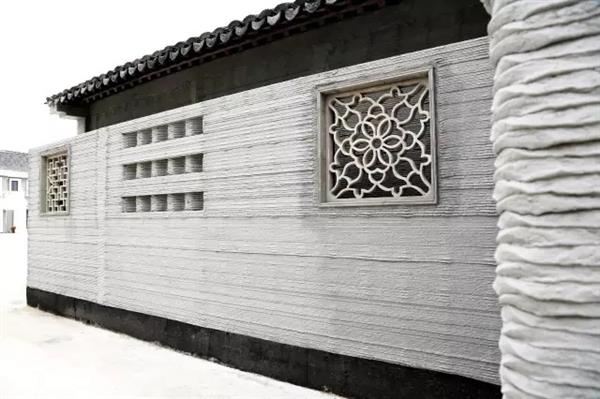 Back in 2014, Shanghai-based company Winsun reached headlines all over the internet for building not one, but ten 3D printed houses in less than 24 hours. Since then, Shanghai WinSun Decoration Design Engineering Co., to give its full name, has been following up their initial success with one 3D printed concrete creation after another, and have just revealed their latest achievement: two gorgeous 3D printed Chinese courtyards, inspired by the ancient Suzhou gardens.

WinSun, of course, is a company that has been invigorating the architectural and construction sectors with their 3D printed creations for years now and is certainly one of the most successful construction 3D printers right now. Currently in their 13th year of business, WinSun holds around a hundred national patents for construction materials, and have been at the forefront of concrete 3D printing for years. Way back in the 2004 and 2005, the company developed a 3D printing spray nozzle and automatic material feeding system. This was followed by a 3D printed wall in 2008. Their biggest achievements were realized just a year ago, when they finished work on two extraordinary 3D printed creations: the world’s tallest 3D printed building (a five-story apartment building, not counting the ground floor) and the world’s first 3D printed villa, 1,100 square meters in size and complete with internal and external decorations.

The company’s 3D printing efforts are led by WinSun chairman Ma YiHe. “I like the 3D printing technology, its science, art and simple culture,” he said of the technology. Those same principles have now been applied to these amazing courtyards, which have been inspired by the Classical Gardens of Suzhou. Almost a thousand years old, these UNESCO World Heritage-listed gardens standardized most of the key features you can see in classical Chinese gardens, featuring natural sceneries of rocks, hills, rivers, pavilions and pagodas. A fantastic point of departure for any Chinese company wanting to 3D print a courtyard.

And the results, as you can see for yourself, are truly remarkable. When entering the garden-style courtyard through the red door, you immediately see the unique rhythm wall texture of the 3D printed building. The courtyard includes a gallery, a garden, windows, a bad bed, vertical green walls, and even 3D printed chairs and tiles. Scenery can be seen all around the courtyard, and every surrounding bedroom also has direct access to the courtyard.

The green walls have also been specifically designed to add to the landscape of the courtyard, and feature space-saving pockets in which vegetables and fruit can be grown. According to its designer Ma YiHe, the courtyard even features specially added wells and fish tanks that form an aquaponics system. The fishes’ feces can be used to fertilize the plants, with filtered water flowing back into the fish tanks through the custom watering system.

As can be expected, every detail of the two courtyards (one is 80 square meters and the other is 130 square meters), have been carefully designed. According to Ma YiHe, every detail has been compared to the actual floor loft, while calculations were made for each scale pitch, every angle and height. All have been integrated based on established principles for acoustic, optical and physiological resting needs.

Ma further said that human wellbeing has also been constantly taken into account, especially from an ergonomic point of view. That’s why the courtyard can achieve uniform lighting. The design has also been carefully set up to create the illusion of far more space through surrounding lines and the connections to surrounding rooms. According to Ma, the 80 square meter courtyard feels more like 100 square meters. Throughout, however, the links to the Suzhou gardens can be found. “We have made some improvements based on the ancient builds of the Suzhou gardens, using 3D printing to express the white walls and gray tiles, and have created gray and black tiles to form a new garden style!” Ma says.

Unsurprisingly, visiting industry experts were very impressed. Several expert visitors praised the site as an architectural masterpiece that combines traditional Chinese culture with modern technology. One representative of tourist attractions even said that they were planning to construct a 3D printed hotel inspired by the courtyards.

This does make you wonder: can you 3D print a theme park? The WinSun Suzhou plant is certainly becoming something of a theme park for lovers of 3D printing. If you walked in today, you would find the world’s highest 3D printed residential building, the 1100 square meter villa and now these courtyards as well. Right now, WinSun also has a 3D printed mobile office on display, which is set to be exported to Dubai, as well as a 3D printed nursing home for two patients, and a 3D printed urban underground pipe network infrastructure. Previously, they also exported several 3D printed housing modules to Egypt. A truly remarkable location, in short, for 3D printing fans.